A duel with epees was agreed upon to take place at Grande Roue de Paris at 10am. On one of Picard’s attacks Romanet used a parry/riposte to hit Picard on the outside of his right wrist. The thrust penetrated the muscle thus ending the possibility of continuing the fight. (More details in French here).

The following report was in the  Wilkes-Barre Times Leader, the Evening News, Thursday, March 23, 1911 Page 11

PARIS, March 22. Blood was shed In two duels to-day but neither of the injured men suffered more than a scratch… The first encounter was between Rene Picard, nephew of former President Loubet, and Joseph Romanet du Caillaud. They met with swords and Picard was slightly scratched on the arm. 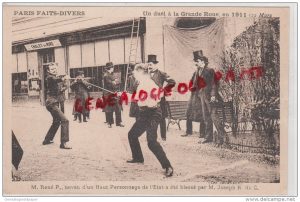