On July 28th, NYCSS is psyched to offer not one but TWO special Sunday Seminars taught by guest instructor Kyle Rowling!

The fantasy sword fight has become a staple pop culture. Characters use unique or even outlandish weapons as they whirl, twirl and defy the laws of physics. But how do we, as actors and fighters, pull off those feats on swordsmanship on set?

This class will focus on taking those weapons and looking at techniques and tricks to use within rules of the fantasy setting throuh Kyle’s wealth of knowledge and unique experience in the subject.

The idea of skillfully wielding a length of chain as a weapon in a choreographed fight can be both exceedingly daunting and incredibly exciting at the same time, making it an amazing focus for our second class!

This seminar will focus on building the basic skills required to use a variety of flexible weapons such as a length of chain.

All payments can be made via paypal to  kyle@action-acting.com. Cash payments on the day of class will also be accepted. Email us at nycfilmfights@gmail.com to reserve your spot. 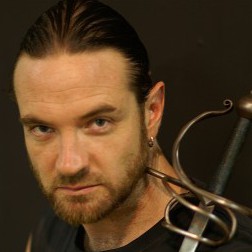 Kyle is a seasoned actor, director and certified Fight Master with a very specialized and extensive skill set with decades of on-set experience. As the Director of The Action Acting Academy, the President of The Australian Stage Combat Association, and the Vice President of The Art of Combat International, he is dedicated to the continued growth and evolution of the art of Stage Combat worldwide.

Kyle has worked in film, television and theatre productions as both an actor and Fight Director. In theatre he has hundreds of credits. In film he was the Assistant Sword Master for Star Wars: Episode’s 2 & 3, and during that time his duties included training actors including Ewan McGregor, Hayden Christiansen, Samuel L. Jackson and Christopher Lee. He was also Christopher Lee’s fight double for both films as well as the movement and fight double for General Grievous.

As an actor, Kyle has worked for many independent theatre companies in Sydney and overseas, including several times for Sydney Theatre Company, Bell Shakespeare, and Opera Australia. He is one of the founding directors of the Sydney Shakespeare company Bard on the Beach, and he has performed on Australian television and also starred in the Starz production Spartacus: Blood & Sand.