Abraham Lincoln once stepped onto the dueling ground.  When queried about it later in life he remarked “If all the good things I have ever done are remembered as long and as well as my scrape with Shields, it is plain I shall not be forgotten.” The notorious duel with James Shields has been almost completely forgotten probably because it did not come to blood shed.

An anonymous letter (signed ‘Rebecca’) to the editor of the Sangamo Journal on September 2, 1842, was published which railed against Shields. Lincoln was a state legislator at the time and James Shields the attorney and auditor of the State of Illinois. Hiding behind the amenity of anonymous writing Lincoln let the personal attacks fly. “Shields is a fool as well as a liar. With him truth is out of the question.” More over he calls Shields conceited by sarcastically quoting Shields as saying ‘Dear girls, it is distressing, but I cannot marry you all. Too well I know how much you suffer; but do, do remember, it is not my fault that I am so handsome and so interesting.’ 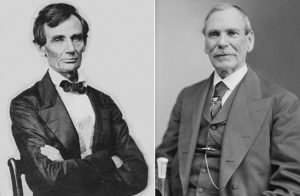 Some historians believe that Lincoln’s future wife, Mary Todd, help write the letter. Shields asked the editor of the paper for Rebecca’s true identity. Apparently Lincoln had instructed the editor to share with Shields that it was Lincoln.

In proper format, Shields had a letter hand-delivered to Lincoln in Tremont on September 17 (full transcript available here) stating ‘I have become the object of slander, vituperation and personal abuse’ and demanded that only a full retraction ‘may prevent consequences which no one will regret more than myself.’ There was a little back and forth until Shields finally challenged Lincoln to a duel.

Lincoln accepted. He set the conditions of the duel to favor his height and reach in an effort to dissuade Shields from the affair. On September 19 Lincoln wrote a letter detailing his terms: “…the preliminaries of the fight are to be—

1st. Weapons—Cavalry broad swords of the largest size, precisely equal in all respects—and such as now used by the cavalry company at Jacksonville.

2nd. Position—A plank ten feet long, & from nine to twelve inches broad to be firmly fixed on edge, on the ground, as the line between us which neither is to pass his foot over upon forfeit of his life. Next a line drawn on the ground on either side of said plank & paralel with it, each at the distance of the whole length of the sword and three feet additional from the plank; and the passing of his own such line by either party during the fight shall be deemed a surrender of the contest.

4th. Place—Within three miles of Alton on the opposite side of the river, the particular spot to be agreed on by you.”

The plan did not dissuade Shields, so on September 22 both parties crossed the river into Missouri to Bloody Island to settle the matter.

Luckily, shared friends came to the dueling grounds to reconcile the gentlemen.  Shields was difficult to dissuade, but purportedly, Lincoln reached up and cut off a willow branch to emphasize his reach. Shields finally backed down and made peace with Lincoln. In fact during the Civil War, Shields was nominated for the rank of Brigadier General in the Union army, but final approval fell to President Lincoln. It was granted.